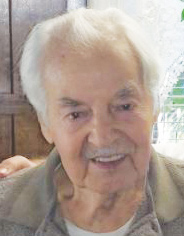 Lloyd Lavern Porter, 95, passed away peacefully March 29th, 2019 of Alzheimer’s Dementia at his home in Oakdale, California with his loving wife and family present. He was born February 7th, 1924 in Wapato, Washington.

He is survived by his wife of 68 years, the love of his life, Betty J. Porter, Oakdale, Ca; son, Lloyd L. Porter, Boise, Id; daughter Deborah A. Zayas, Antioch, Ca; son, Mark A. Porter, Oakdale, Ca. He is also survived by the blessing of 13 Grandchildren, 26 Great Grandchildren and 6 Great Great Grandchildren. He was preceded in death by his father, William Porter; mother, Alice B. Collage and truly loved and missed son, James L. Porter.
Lloyd was a member of the Church of Jesus Christ of Latter Day Saints and loved his Heavenly Father.

He was a great example of how one should live one’s life in service of our Lord and community. Lloyd and his wife loved cooking and serving food for the homeless in their area and brought many smiles to the faces of those less fortunate. Lloyd was the kind of man who would do anything to help another person. He was also a very proud Veteran of Foreign Wars serving in the US Navy during World War II and some time after. He greatly loved that part of his life and loved to tell stories of his adventures to his children, grandchildren and great grandchildren. A popular vision of him in latter years was of him proudly wearing a Veteran’s hat given to him by his late son James.

Lloyd’s work ethic was impeccable, an example he set for all. He loved his career as an Engineer and worked into his 70’s before retiring from O’Conner Hospital. He had many hobbies he was passionate about. He loved to garden and landscape. His yard was always an envy to most and as for his gardening, he was known far and wide in the valley for the vegetables and tomatoes he grew. He kept many friends, family and those less fortunate in fresh vegetables for years. Another thing he found so much joy in was fishing and boating. If you ever want to see a huge smile on Lloyd just start talking about fishing or taking his boat out in Monterey Bay. It was a passion that he shared with many friends and family. Also was something he handed down to his sons and grand children.

Lloyd was one of the best examples a person could have for showing the love for his wife and always expressing his appreciation for her. Right up until the end of his life here on earth, when speech was hard and memories jumbled a bit, he always knew who was caring for him and it was quite a treasure to hear him talk of how beautiful his Betty J. Porter was and how lucky he was to have her as his wife. He passed with that comfort of knowing he will be joined with his beloved wife for time and all eternity.
A private Memorial and Celebration of life for Lloyd Lavern Porter held by the family.

Bennie Pearl Ebbs Patterson passed away at her Gilroy...