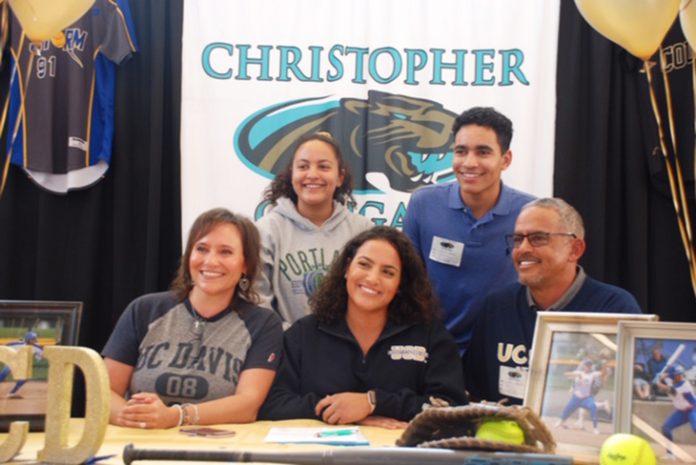 Moments before every softball game, Sarah Starks feels at peace. The Christopher High senior has a very good reason for feeling this way.

“My mindset going into every game is I know it’s not necessarily what you do on the field, but at that moment it’s how you have prepared yourself for that moment,” said Starks, who signed her national letter of intent to play at UC Davis last week. “I know as long as I’ve been preparing myself, I’ll be successful. If you set it in your head that you’ll work for your goal, you’ll do well.”

Starks has done more than well, thank you. Starks is coming off a solid junior season and looks forward to having another terrific performance in her final go-around in a Christopher High uniform. A third baseman for the Cougars, Starks’ best position is first base. In addition to playing solid defense, Starks possesses a strong swing. According to Starks, UC Davis coach Erin Thorpe was looking to “recruit a first baseman power hitter.”

Starks certainly fits that bill, as she possesses a strong swing and is adept at hitting the ball to different areas of the field. UC Davis actually offered Starks a scholarship in September of her junior year. Portland State was actually the first program to offer Starks, and that was another nice option since Starks has family in Oregon. However, upon visiting Davis, Starks knew it was the place for her.

Starks started playing softball at age 6, and it’s always been her strongest sport. However, Starks also played on Christopher’s basketball team in her freshman and sophomore years and water polo in her junior and senior years. Not only has playing additional sports helped Starks hone a variety of skills, but it also keeps her fresh for the high school and club softball seasons, which can be downright grueling.

Starks experienced something truly special when the Salinas Storm 18U team won their division of the prestigious Premier Girls Fastpitch (PGF) National Championships in Huntington Beach in July 2017.

Starks said playing for Christopher High and for the Storm has pushed her to be a better player. In particular, playing club ball has elevated her game.

“It’s all about finding friendly competition with your teammates,” she said. “You’re competing for a position with them, and it is healthy to push each other to be better.”