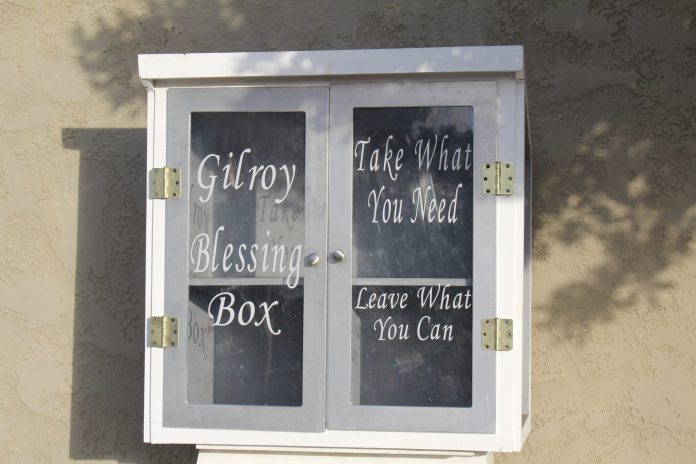 By: Gilroy Dispatch Staff
February 2, 2018
403
1
There is a national phenomenon called Blessing Boxes that within the last year, fueled by social media, has exploded into hundreds of cities. The boxes take many shapes and sizes but most are two- to three-feet square, and offer canned goods for free. This phenomenon reached Gilroy last spring, when a few local women read about these boxes on social media, and decided to build one for Gilroy.

For more than eight months, members of the group—now numbering 19—have gone to a Monterey Street parking lot in Gilroy and filled a small white cabinet with canned goods and other packaged foods.

“Take What You Need, Leave What You Can” is written on the plexiglass doors, which are opened and quickly emptied each day by people in need.

There is a counter-phenomenon lurking nationally: Cities are arresting citizens who try to feed and help their homeless neighbors. The rationale is, if you don’t help these folks, maybe they will go somewhere else.

This counter-phenomenon also has reared its ugly head locally.

A week ago, the city of Gilroy tried to shut it down the Blessing Box—then quickly rescinded the order when the enforcement action ignited a firestorm on social media. It turns out there may have been no legal basis for the short-lived municipal crackdown.

It’s good news that the city came to its senses and rescinded the order. But it’s not good news that administrators are still looking for some way to “regulate” the good will of Michelle Bozzo, Melanie Mikeska and Jina Carranza, and their friends in the future.

“The city administrator decided he wanted to do further analysis of how these types of boxes should be regulated, if at all—and what is the council’s desire,” Mayor Roland Velasco told the Dispatch this week.

There must be more pressing issues for city code enforcers. And there certainly must be a variety of proactive steps the city can take to tackle the tough questions of homeless citizens that don’t involve removing the opportunity for a few free cans of soup.

We should count our blessings, which include the women of the Blessing Box, then figure out positive ways to share the bounty of a caring community with the least fortunate amongst us.
Share
Facebook
Twitter
Linkedin
WhatsApp
Email
Print