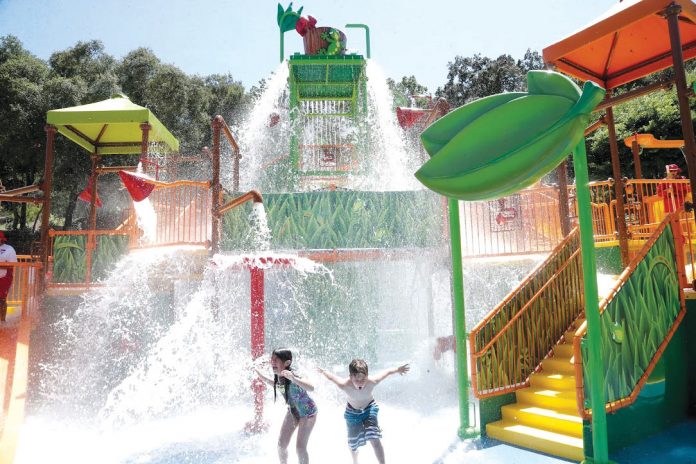 The Gilroy Gardens Board of Directors is looking for direction from the Gilroy City Council on possible expansion plans, but the directors’ meeting with councilmembers instead focused on the horticulture theme park’s bottom line.

The park’s board sat down with the council on Feb. 18 and told the elected officials the Hecker Pass attraction is still operating in the black, but is in need of a long range plan.

The city, which purchased the land the park sits on and its assets in 2008, is currently in negotiations with Gilroy Gardens to extend its year-by-year lease.

Park board chairman Greg Edgar said the board is exploring a number of expansion options for Gilroy Gardens, including an “adventure park” proposal on the hillside behind it, but noted that it needs a vision from the city on what it should be pursuing.

In 2008, the City of Gilroy purchased the 536 acres of land that includes the park and hillside for $13 million, paying off the park’s remaining bond debt.

The city receives a percentage of the park’s operating income, and in 2017, that number was $164,086, according to the most recent Form 990 available, which lists revenues and expenditures.

According to Edgar, the park has paid the city more than $1.1 million in the 12 years since the purchase. Since 2011, Gilroy Gardens has re-invested nearly $8 million into park upgrades, which included the Water Oasis area and the Green Barn educational center.

Whether the city’s take in the park’s revenues was too much or not enough was a topic of discussion during the meeting.

Councilmember Fred Tovar said the city should re-look at the percentage it receives annually from the park, but in a way that keeps the park sustainable for the next few decades. Currently, the city receives 10 percent of revenues using a formula known as EBITDA, which stands for earnings before interest, taxes, depreciation and amortization.

“Maybe it has to be higher, maybe lower,” he said. “I want to see this park succeed, but I want the city to be comfortable with the return.”

Board director Jay Baska, who was city administrator when Gilroy purchased the park, said the park is operating on tight margins. According to General Manager Barb Granter, Gilroy Gardens operates below industry standards when it comes to spending on new attractions and programs, sitting at about 5 percent of revenue. Its nearly 3 percent spending on deferred maintenance is about average, she noted.

Such investment in the park has been critical to keeping its doors open, board director Steve Peat said.

“If that money hadn’t been put in, there’d be a fence around that park,” he said.

When Edgar mentioned that the value of the park’s land could be as much as $59 million, Councilmember Cat Tucker mused on ways the city could benefit from it, such as selling the land and using the funds to build an ice rink proposed for the Gilroy Sports Park or other projects.

That idea was rejected by other council members as well as the handful of residents who spoke during the meeting.

Gilroy Gardens docent Susan Mister, who lives near the park, urged the board and city to invest in the park.

“Do not sell this prime piece of property,” she said. “It’s a gold mine. It’s not always about the money. In business, you have to spend money to make money. You have to take risks. This is a prime place to take risks.”

Edgar said that despite some challenging years, such as the Great Recession in 2008, Gilroy Gardens has had steady growth in recent history.

She noted that attendance dropped about 25-30 percent during August and September, driven by the public’s concerns over safety following the mass shooting at the Gilroy Garlic Festival on July 29. However, Granter said the park ended the year “less than 10 percent off due to strong pre-incident numbers and a strong Halloween and holiday showing.”

Park officials are also concerned about how travel restrictions from China because of the new coronavirus will affect attendance in 2020. China is the top country of origin for Gilroy visitors, according to the California Welcome Center Gilroy.

The report, which was completed in November, surveyed a variety of different future scenarios, such as what type of numbers the park would bring in if it further expanded its water park or added the adventure park on the hillside.

According to the study, the park currently brings in about $15.3 million in revenue annually, supporting 901 jobs. Park visitors are estimated to spend $1.7 million at other establishments throughout the city.

If both a water park expansion and a new adventure park came to fruition, it could boost average attendance by roughly 400,000 annually, the study found, increasing revenues by $25 million. Such funds are needed to combat rising costs, especially the minimum wage, which Granter estimates costs the park an extra $500,000 annually for every dollar it increases.

In 2016, Gilroy Gardens embarked on a 10-year master plan, which, among other things, aims to grow annual attendance to 500,000 by 2022 and attract a larger percentage of children in the 11- to 12-year-old range.The park, which opens for the season on March 27, is celebrating its 20th anniversary this year. It plans on holding a variety of special events throughout 2020.