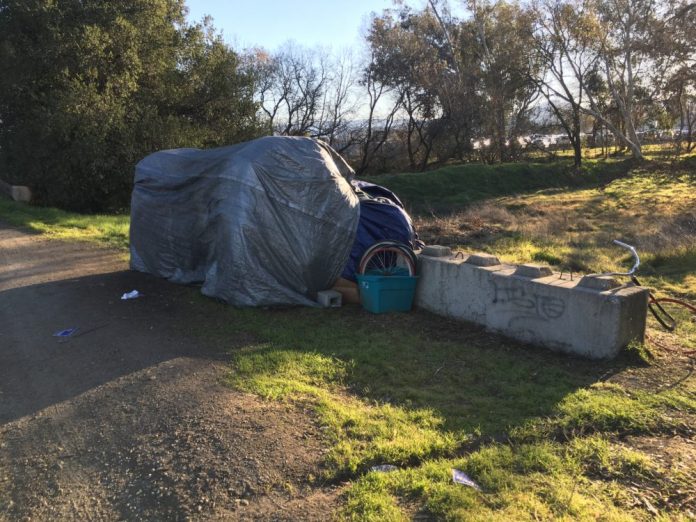 Suspect was released after Jan. 3 arrest

Accusations that a homeless man sexually assaulted a woman at his makeshift shelter in San Martin remain under investigation, according to authorities. The man has not been charged with a crime, and was released from custody shortly after his arrest last week.

The suspect had returned to his shelter on Llagas Avenue, across the street from the San Martin Transfer Station, by the afternoon of Jan. 4. He had been arrested Jan. 2 by Santa Clara County Sheriff’s deputies after a woman who had been helping him for several months told police that he raped her inside his shelter, the sheriff’s office reported last week.

When visited Jan. 4 by a Dispatch reporter at his shelter—which is made of a series of tarps and shopping carts—the 43-year-old homeless man presented paperwork from Santa Clara Valley Medical Center in which a nurse described his mental state as “psychotic.” The paperwork, a form titled “Involuntary Patient Advisement” dated Jan. 3, indicated that hospital staff who evaluated him thought he might harm someone.

“You were psychotic, and you allegedly attempted to rape someone,” reads a hospital staff person’s handwritten note on the Valley Medical paperwork.

The DA’s office has not charged him with a crime in relation to the recent accusations.

On Jan. 3, the sheriff’s office released a statement that a suspect had been arrested the previous day on suspicion of sexual assault and false imprisonment. The arrest followed the report from the alleged victim, a woman who had been providing assistance to the homeless man for several months. The woman told deputies that on the evening of Jan. 2, she visited the man’s shelter to deliver food and supplies. She told deputies he raped her inside his shelter.

The man was booked at Santa Clara County Jail, according to the sheriff’s office. His recent paperwork from Valley Medical indicated he was also medically evaluated after his arrest.

A printed explanation of the 72-hour-maximum hold states, in part, “During these 72 hours, you will be evaluated by the facility staff, and you may be given treatment, including medications. It is possible for you to be released before the end of the 72 hours. But if the staff decides that you need continued treatment, you can be held for a longer period of time. If you are held longer than 72 hours, you have the right to a lawyer and a qualified interpreter and a hearing before a judge.”

Although a previous Dispatch report named the man, based on the sheriff’s Jan. 3 press release, this newspaper is currently declining to name him because he has not been charged with a crime.

While talking with a Dispatch reporter at his shelter Jan. 4, the homeless man frequently spoke in incoherent terms. When asked numerous times why he was arrested, he repeated a theory that he was being controlled by professionals in a lab in South Carolina to which he once donated blood. He also failed to coherently say how long he has been living at his shelter in San Martin and whether he knew any nearby residents, including the woman who accused him.

Anyone with further information about this case can call the sheriff’s Sexual Assault Investigative Unit at (408) 808-4500.