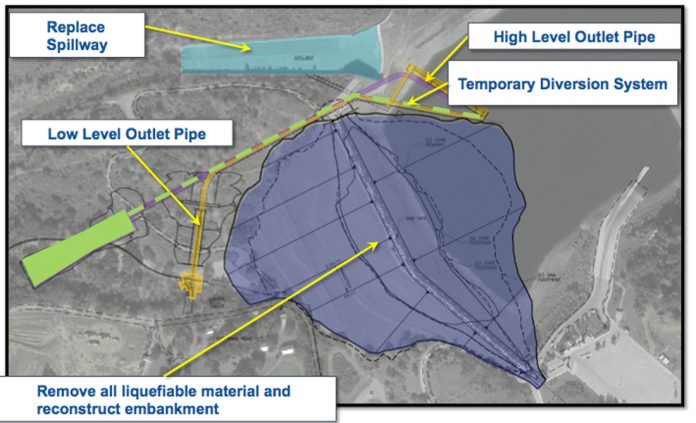 Anderson Reservoir will close to public through 2030

Anderson Reservoir will be closed to boating, fishing and all recreational activities for the next several years starting Oct. 1. That’s when the local water district will begin draining the lake in order to begin construction on a new discharge tunnel and seismically retrofitted dam.

Valley Water Director John Varela said during a Sept. 17 webinar that the district will lower Anderson Reservoir’s water level to the “lowest practical level possible” in order to make way for the retrofit project. It will take about two months to drain that much water from the reservoir, depending on how much rain falls this winter.

After the reservoir—which spans from east Morgan Hill to south San Jose—is drained to the appropriate level, construction will begin in early 2021 on a new outlet tunnel that will vastly improve authorities’ ability to quickly discharge large volumes of water from the bottom of the lake into Coyote Creek, Valley Water staff explained. Construction of the tunnel will last about three years.

After the tunnel is complete, construction will begin on the Anderson Dam Seismic Retrofit project, which is expected to last until about 2031. Then, Valley Water will be able to allow Anderson Reservoir to return to its full capacity for the first time since the existing dam was deemed seismically unsound in 2009.

All recreation and public access to the dam and reservoir will be closed as of Oct. 1, and remain closed throughout the tunnel and retrofit construction process. That includes closures to vehicle access to the crest of the dam off Cochrane Road in east Morgan Hill.

The total cost of the tunnel and retrofit project is about $576 million.

Anderson Dam was built in the 1950s “to the standards of the time,” Hakes said during the Sept. 17 Valley Water presentation. In 2009, state authorities determined that the dam would not withstand a major earthquake, and the crest of the dam could slump in such an event—leaving Morgan Hill underwater within minutes.

Upon further study, the local water district determined that the interior of the earthen dam could liquefy in the event of a significant earthquake on the Calaveras fault, which is about 1.2 miles from Anderson Dam. Since 2009, as a precaution the reservoir level has been maintained below 60 percent of the reservoir’s capacity—except during occasional storms that produced heavy rainfall.

“Valley Water has made this our number one priority,” Hakes said Sept. 17.

Hakes explained that federal and state dam safety standards have grown much stricter in the decades since Anderson Dam was built. Thus, the retrofitting project must be preceded by the tunnel installation, which will serve as a major upgrade to the discharge pipeline that currently drains into Coyote Creek. The new tunnel—which will be buried under the new dam and span up to 24 feet wide—will allow the reservoir to discharge up 2,000 cubic feet per second (cfs) into the creek. The existing pipe—which will remain operational after the retrofit is completed—only allows up to 500 cfs.

Valley Water might have to release high volumes of water from the reservoir during heavy rainfall that threatens to fill Anderson beyond its capacity. The last time that happened was in 2017, when the reservoir breached the emergency spillway, flooding Coyote Creek and residential areas of San Jose downstream from Anderson.

“Five hundred cfs is not very effective in controlling the reservoir level,” Hakes said. “The new channel will be much quicker.”

The dam retrofit project will entail removing all “liquefiable material” from the existing dam, then reconstructing the core as well as upstream and downstream embankments, Valley Water staff explained. Crews will maintain a temporary diversion channel for stormwater and other runoff during construction.

Coyote Creek will continue to flow downstream from Anderson Dam during the dewatering and tunnel construction process, according to Valley Water staff.

The Anderson Dam Retrofit project includes the construction of a new spillway in accordance with more new federal standards adopted after the Oroville Dam in northern California failed in 2018, Hakes explained.

During the Anderson Reservoir dewatering phase over the next few months, possible impacts to nearby residents include noise from construction equipment; work crews in the area most weekdays and some Saturdays; and increased water flow into Coyote Creek after storm events. Residents might also smell some “unique” scents from the dewatered reservoir, as more algae is expected to grow—resulting in depleted oxygen in the water and the release of hydrogen sulfide, which can create a “rotten egg” smell, Hakes said.