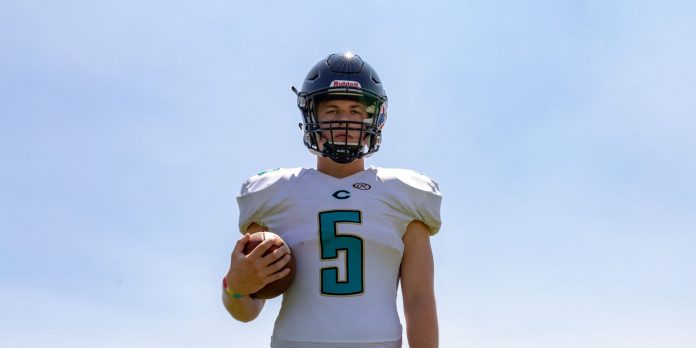 Football is a ‘what have you done for me lately’ kind of sport and Christopher High coach Tim Pierleoni knows it. One year after winning the Central Coast Section Division IV playoff championship, the Cougars won’t only be asked to repeat their postseason performance but to survive a promotion into the new, heavy-hitting Pacific Coast League Gabilan Division.

“It’s not like last year,” Pierleoni shouted as he ordered his players to run up-downs as punishment for what he saw as a poor effort on a Monday practice. “You going to do that against Palma? Hollister? Aptos or Salinas?”

Thick skin in football goes beyond taking hard hits and playing through pain. Football is a head game, and if the head isn’t right, neither will be the body. This year expectations will be high and so will the competition. There isn’t much time for reminiscing.

“It’s a nice feeling, but by the time February rolled around, it was time for next season,” Pierleoni said.  “Winning a CCS was a dream. The coaches and players did a great job, but it’s ‘what have you done for me lately.’ You move up, and they expect you to win.”

If the Cougars are going to thrive or survive  in their new division, they’ll need to rely on their seniors to lead the way. Quarterback Ben Sanford, wide receivers Joseph Cupp and Jason Scirigione, and twin-brother speedsters Tyler and Christian Davis are all together for their last high school football season.

Sanford, at 6-foot and 175 pounds, is back after throwing for 2,452 yards and 27 touchdowns in 2017, earning him a second-team Monterey Bay League all-league award and CCS honorable mention player.

“His arm is stronger this year,” Pierleoni said. “He’s accurate, and he’s a good decision maker. He knows what I want him to do.”

Twins Tyler and Christian Davis will provide playmaking ability, with Christian at receiver/defensive back and Tyler at running back/defensive back. The Cougars hope speed does kill, as the Davis twins utilize their speed to produce big plays. They’ve been racing each other their whole lives, starting from minute one.

“I was born seven minutes before he was, but he’s the fastest,” said Christian Davis, who was second on the team with three interceptions last season.

Both Davis’ play fast on game day and at practice. They don’t take plays off. Effort and attitude help to make up for size, as both are 5-6  and around 160 pounds. You can’t hit what you can’t catch.

“They are two of the toughest players on the field, and they are no doubt excellent players,” Pierleoni said. “They’re like rolling razor blades.”

At wideout, the Cougars have two first team all-league standouts in Joseph Cupp and Jason Scirigione, who are both big targets at 6-2.

At Christopher High, there is one particular jersey number that stands out above the rest: No. 5, like Jake Moen, now a senior linebacker at Dartmouth College. Now Scirigione wears the honor. It’s a tradition of that goes back to the Legend of 44, which was Jim Brown’s number at Syracuse University.

Growing up Pierleoni moved a lot. From city to city, including Syracuse where Pierleoni played lacrosse, he eventually found his way to Gilroy, where he starred as a lineman for the Mustangs. The honored digit, the No. 5 at Christopher, goes back to his love of lacrosse, and roots in upstate New York.

“He’s been the best player on the team since his sophomore year, and he wears number five for a reason,” Pierleoni said. “He has the best hands of any player I’ve ever coached, and he’s got great spatial awareness. He’s our slot receiver. He finds soft spots on the inside, and he exploits the mismatches.”

The Cougars will depend on youth on both offensive and defensive lines. Pierleoni will also break in three or four new linebackers.

“Our offensive line is going to be young, but well coached,” Pierleoni said. “We won’t have a lot of them though, and most guys will probably be playing both ways. We’re going to find out what we have at linebacker, (as) we lost a lot of talent from last year, but they were good backups and junior varsity players.”

Numbers say a lot, too. Christopher’s departing conference foes won 11 games, compared to the 40 wins for its new division mates.

Salinas (11-3, 7-0) won the CIF Central Coast Section Open Division 1 Championship, and later advanced to the Regional Finals in the CIF Division 4AA Playoffs where they lost to Placer High School, 43-42.

“Salinas is the best team we’ll see,” Scirigione said. “They’re huge, and when we were in JV (junior varsity), they beat us by 30 points.”

Pierleoni, who is in his 34th year in coaching was unloading beer trucks in the fall of 1985 at 3 a.m. when he was asked by a co-worker, who happened to be a coach at Pleasant Valley High, to come out to help with practice. After one day back on the field, football hooked him again.

“I woke up the next morning, and I wasn’t sore,”  said Pierleoni, now in his tenth year at Christopher. “I said to myself ‘this is it.’”

Old school former high school football veterans may not recognize conditioning drills in new high school ball. Two-a-days are a thing of the past, too. Pierleoni, however, believes that a well-conditioned team wins in the fourth quarter.

Being a football player isn’t easy. When your friends are going home, eating Lucky Charms, playing video games, and hanging out with friends, you’re out on the field, in the heat, working hard, on and off the field, including the weight room. That includes work in the classroom.

“It’s all about academics at Christopher High,” Pierleoni said. “They have a lot more to learn than we did as kids.”

Numbers are a concern for the Cougars. Since Gilroy has two high schools, the pool of available players is split between the two schools, unlike at San Benito High, which is the only game in town. Because of this, freshmen and the junior varsity will see a lot of time together.

“We’re all creatures of habit, and that’s what I teach our players,” Pierleoni said. “You need to be in the habit of working hard, being quick, and not being hurt. It’s a habitual sport, and that’s why life and football go well together.”