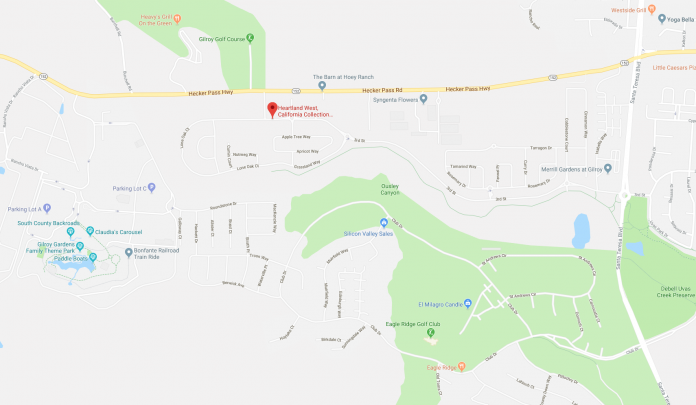 By: Barry Holtzclaw
July 4, 2018
313
0
A divided Gilroy City Council on July 2 narrowly approved an “agri-tourist” commercial development near Hecker Pass Highway (CA 152) and Santa Teresa Boulevard.
Four council members—Daniel Harney, Peter Leroe-Muñoz, Fred Tovar and Cat Tucker—rebuffed pleas from Mayor Roland Velasco and a standing-room-only crowd of Heartland neighborhood residents to send the plan back to the drawing boards. Dion Bracco and Marie Blankley also voted against the project of Hecker Pass Commercial LLC.
The 4-3 vote followed a contentious four-hour public hearing, attended by more than 150 people. After the vote, Blankley explained that she actually supported the project, but was concerned that it included two-bedroom as well as one-bedroom “live-work” apartments.
City staff said the plan met all city requirements, but the city Planning Commission had deadlocked 3-3 when it considered the plan last month. Monday’s hearing duplicated arguments presented at the planning board meeting.
The mayor praised “the natural beauty of the area, truly the gateway to Gilroy,” and warned that the plan could jeopardize that.
“The two-story building looks too monolithic,” he said. “I hope that we aren’t so rushed to develop this area that we settle for something that is unremarkable.”
“This project will set the standard” for future projects in the area, Velasco said.
He sought, unsuccessfully, to reject the plan “with prejudice,” to require a redesign, plus a new round of community meetings.
Provisions for an “agri-tourist commercial” project had been included in the city’s 2005 plan for residential and commercial development along the western gateway to Gilroy.
The plan approved this week includes three connected two-story buildings across Hecker Pass Highway from the Gilroy Golf Course, with an entrance at the end of a new residential neighborhood, part of the 509-home Heartland development and northwest of Eagle Ridge Golf Course and residences.
The three commercial buildings include: one for winery functions, and two mixed-use buildings with ground floor restaurant and retail uses and 22 live/work units on the second floor. The live/work rental units are not allowed to be for sale and are not intended to be used or sublet for use by someone other than the residential tenants.
The commercial uses would total 32,758 square feet and are anticipated to comprise a wine-tasting room, a wine warehouse, covered crush area, a small retail store, several eateries and a deli and wine store. There are 178 parking spaces provided for the commercial/retail portion of the development which includes the wine warehouse and tasting room, retail spaces and restaurant.
A small vineyard will extend the length of the property, according to the plans.
The chorus of complaints from more than 20 residents Monday followed similar complaints voiced at the Planning Commission, in letters to the council and in numerous neighborhood meetings with developers and with individual council members about noise, traffic, safety, lighting, parking, appearance and an ambience they said didn’t fit with their quiet neighborhood. Several nearby communities are gated developments, and a house on Lone Tree Lane near the site is listed for nearly $900,000.
Speaking in favor of the project were Mark Turner of the Gilroy Chamber of Commerce, as well as representatives of the Gilroy Economic Development Corporation and Gilroy Gardens, which is located just west of the neighborhoods.
Turner praised the plan, presented by Heartland developer Skip Spiering as an example of “smart growth.”
Jane Howard of the city’s Welcome Center, called the agri-tourist plan “a great opportunity for this community.”
“This is just another apartment housing development disguised as ‘agri-tourism,” countered one resident, and many of his neighbors called the plan “another strip mall” with access only through a residential neighborhood.
One resident, Garrett Bennett, who moved to the new Gilroy neighborhood a year ago, testified against the project, and brought his three daughters, 15-year-old Alexa, 12-year-old McKenzie and 9-year-old Meghan, who also spoke out against the project as disrupting their quiet neighborhood.
Spiering had sought to build more single-family homes on the six-acre site two years ago, but that plan was rejected by city planners as not complying with the requirement for an agri-tourist destination.
This time around, the city enlisted the services of a historian who recommended changes that  would ensure “a quality development that reflects the rural nature of the area.”
The Hecker Pass Specific Plan project allows a maximum of 509 dwelling units. Thus far, 402 units have been built or approved. This leaves the 22 units in the project approved this week, and a 72-unit project up for consideration in August.
Share
Facebook
Twitter
Linkedin
WhatsApp
Email
Print