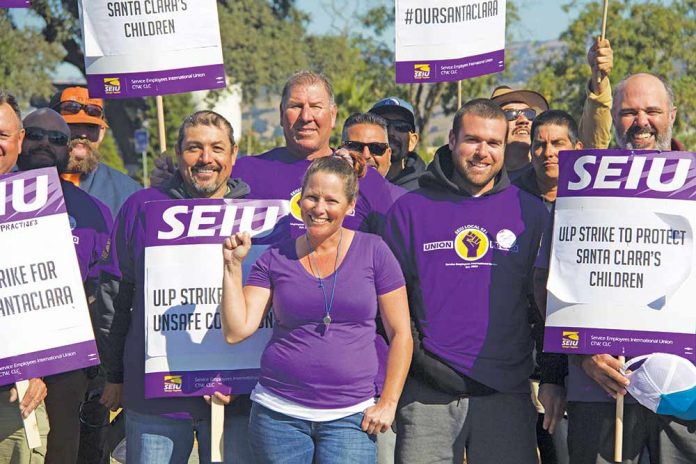 County unions poised to strike in 2020

Santa Clara County is approaching the new year with lingering, rancorous labor fights with two unions representing more than 15,000 employees. Tensions with both unions heated up last week, as both contract disputes took turns for the worse.

The Registered Nurses Professional Association (RNPA), with more than 3,000 members, voted Dec. 22 to authorize a strike if its negotiators fail to reach an agreement two months after expiration of its contract with the county.

In an interview with this newspaper on Dec. 20, County Executive Dr. Jeff Smith said he remained optimistic that the contract dispute with the nurses would be resolved soon, but foresaw a more difficult path ahead in the SEIU contract talks.

“We were disappointed that [the SEIU] terminated mediation,” Smith said. “We felt we were making progress.”

Smith said the county is prepared to offer its workers a $1,000 “ratification bonus” if their unions ratify new contracts. He said any new agreements on salaries would not be retroactive to the date the old contracts expired.

SEIU leaders said they would voluntarily commit to refrain from calling a strike at least until Jan. 10.

As for the nurses, the county executive said, ”I think we should be able to get to a contact agreement.”

The RNPA announced Dec. 23 that 94 percent of votes cast over two weeks from 65 percent of its membership favored a strike if necessary.

“The powerful statement gives RNPA’s member bargaining committee authorization to call a strike if conditions at the bargaining table demand it,” the union said in a statement.

“To date, the county’s proposals fail to account for high local costs of living and continue to leave county nurses making 10 percent less than the average wages at six local private hospitals,” the nurses said in a statement.

“Nurses like me serve the county’s vulnerable patients but under conditions that make it challenging to give the highest quality care and attention,” said Joshua Lauro, a registered nurse in the Emergency Department at Valley Medical Center.

“We work long hours in public hospitals, clinics and custody facilities that are chronically understaffed. Uncompetitive pay and benefits drive many of our most experienced nurses to local private hospitals.”

“Nurses turned out to vote because we know good jobs for nurses and top quality care for patients go hand-in-hand,” said Lauro in a statement released by the RNPA.

The SEIU represents more than half of the county’s 22,000-member workforce, but claims that they account for barely a third of the county payroll.

“Rank-and-file members call on the Board of Supervisors to justify offering 6 percent raises to lowest paid workers and 11 percent to managers over next two years while county claims financial hardship,” the union said in a statement released Dec. 18.

After weeks of voluntary mediation between the county and the SEIU, the workers’ bargaining team ended the mediation talks after they said the Board of Supervisors refused to address a “widespread vacancy and retention crisis” in county government.

“Jeff Smith, under the direction of the Board of Supervisors, has for months ridiculed and undermined the efforts of frontline workers to reach an equitable agreement that puts forth long-term solutions to the staffing crisis impacting our residents’ abilities to obtain critical services,” said Janet Diaz, a business services clerk at Valley Medical Center and Santa Clara County Chapter SEIU president. “The county’s offer to its management employees contradicts Smith’s claims that the board must offer so little to frontline workers because that is necessary to reach ‘a positive and sustainable resolution that protects the stability of the county budget.’ “

Diaz said the county’s bargaining  stance is not about sustainability, “It’s about a total lack of respect for the county’s lowest paid workers and for the residents who don’t get the level of service they need because of the high number of vacancies that result from inadequate pay.”

The SEIU also expressed concern about raises the county has settled on with its management employees.

On Dec. 4, the county announced an offer to management employees that would increase pay by 6 percent in 2019, 5 percent in 2020, and 3 percent per year thereafter.

The county’s “last, best, and final offer” to employees represented by SEIU Local 521 was 3 percent per year for the same five-year period.

“The SEIU-represented workers are disproportionately women and people of color. Denying equity to the SEIU workers will only exacerbate the economic divide that already exists in our community,” said Riko Mendez, SEIU Local 521 chief elected officer, in a statement.

Diaz said that SEIU is “willing to continue negotiations to reach a fair agreement on the terms of a collective bargaining agreement.” But she added that changes at the newly-acquired hospitals remain unresolved.

The nurses are raising comprehensive demands in six areas: