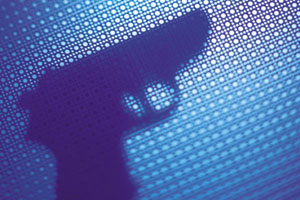 By Jennifer Wadsworth and Michael Moore

Wasserman, who is serving his third elected term as county supervisor, said Friday afternoon that he had not seen the indictment, and he was not aware of the accusations against Jensen. He declined to comment before learning more about the Aug. 7 indictment, but he confirmed that he holds an active concealed weapons permit from the sheriff’s office.

The indictment, released by District Attorney Jeff Rosen’s Office, accuses Jensen of seven felony counts of falsification of public record by a custodial officer. Count 7 says Jensen on or about April 6, 2019, “did willfully falsify the whole and any part” of Wasserman’s CCW firearms proficiency form.

The other six counts claim Jensen falsified similar paperwork for five other CCW permit applicants, whose names are also listed in the indictment.

Wasserman, who represents the district that includes South County on the board of supervisors, is listed as one of 19 witnesses “examined” by the grand jury that issued the Aug. 7 indictment.

In a press conference in San Jose, Rosen on Aug. 7 said more charges could be filed in relation to the ongoing probe into Sheriff Laurie Smith’s office’s issuance of concealed weapons permits. In the Aug. 7 indictment, Jensen along with attorneys Christopher Schumb and Harpaul Nahal, and gun parts manufacturer Michael Nichols are accused of felony charges related to a conspiracy to illegally obtain CCW permits for employees of a Silicon Valley security company.

Specifically, all four defendants will be charged Aug. 31 with felony counts of bribery and conspiracy to commit bribery. Jensen is additionally accused of the seven counts of falsification of a public record, but it is unclear if these charges are directly related to the bribery investigation.

The DA said the investigation into the sheriff’s office was triggered by an inquiry from Metro Silicon Valley newspaper into a conspicuously generous and possibly laundered campaign contribution to a committee that supported Smith’s re-election in 2018.

In Rosen’s telling, the four defendants conspired with a middle manager at executive protection firm AS Solution to bribe Capt. Jensen in exchange for concealed weapons permits. The alleged scheme unfolded two years ago when Smith was in the midst of a competitive re-election bid with her former No. 2, Undersheriff John Hirokawa.

A resulting probe revealed that weeks after the plot was hatched, the defendants settled on a $90,000 “donation” for 10 to 12 concealed weapons permits, Rosen said.

After submitting seven applications for the permits at a private meeting, Martin Nielsen—a middle-manager at Seattle-based AS Solution—allegedly donated the first half of the bribe to the Santa Clara County Public Safety Alliance, an independent expenditure committee supporting Smith’s most recent re-election.

Nielsen then handed the $45,000 check to Schumb, the committee’s assistant treasurer. The donation represented more than half of the funds raised by the committee that year.

A second donation was forestalled by the DA’s resulting investigation.

Smith has not been accused of a crime.

At the Aug. 7 press conference, Rosen said CCWs should never be for sale and that Capt. Jensen abused the program by undermining the fairness of the application process.

“There are two policies for those seeking CCW licenses,” the DA said from behind a podium, flanked by some of the prosecutors who worked on the case. “For average members of the public, no matter how pressing or justified their need, if they follow the procedure laid out on the sheriff’s website, it will not be reviewed. Instead it’ll be tossed in a filing cabinet and forgotten. However, if you are, in the words of sheriff Capt. James Jensen ‘a VIP,’ then he will meet you at Starbucks, personally review your application and help you fill it out. You don’t even need to live in the county, which is required by law. And Capt. Jensen will even waive the required firearms testing at the gun range.”

Sgt. Michael Low, a spokesman for the Sheriff’s Office, announced Aug. 7 that Jensen will be placed on administrative leave immediately. “We will continue to monitor the situation and have no further information to provide at this time,” he added.

Jensen’s attorney, Harry Stern, wrote in an email, “James is devastated by this development. It is extremely painful to have his integrity questioned after spending years dedicated to serving the people of Santa Clara County. I haven’t been provided any evidence at this point, but broadly speaking I believe that all of the folks involved were legally able to obtain the permits. Moreover, he doesn’t have the authority to grant permits nor did he receive anything for processing them.”