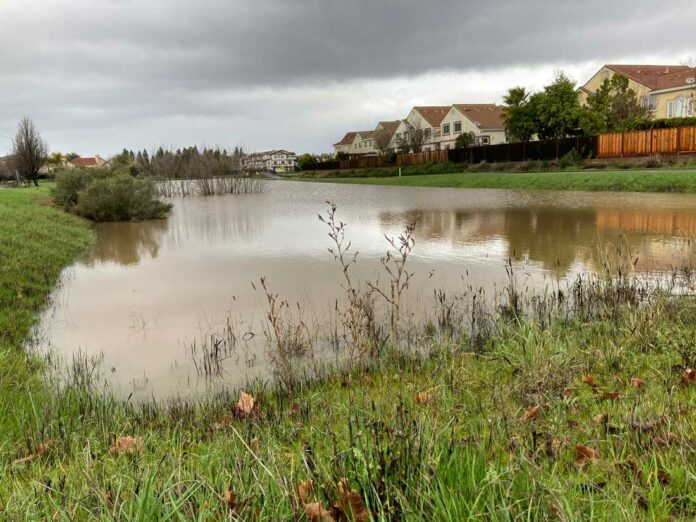 With seemingly constant rain storms pummeling the South Bay so far this winter, a federal drought monitoring program recently downgraded most of Santa Clara County from “Severe” to “Moderate” drought. But local water supply authorities warn that residents and property owners should continue to conserve water and behave as though drought conditions will persist through the winter.

“In spite of the recent rain, Santa Clara County remains in a drought emergency,” Valley Water spokesperson Matt Keller said in a Jan. 6 email to this newspaper.

Keller noted that in 2021, the eastern California Sierra mountains saw record snowfall in December, but the following month was the driest January on record. “It is still too early in the wet season to determine if this rain and snow we’ve received will have a lasting impact,” Keller said last week.

Authorities from Valley Water, the water district that supplies water and flood control for Santa Clara County, won’t have a more definite picture of drought conditions and the impact on the water supply until April or May, Keller said.

Before Jan. 3, the entirety of Santa Clara County has been in a Severe drought since before January 2021, according to the website.

Moderate drought is characterized by some damage to crops and pastures, as well as low streams and other waterways, says the Drought Monitor website. Severe drought is indicated by likely crop losses, common water shortages and imposed water use restrictions.

The driest category is “Exceptional Drought,” which is currently not seen anywhere in California, according to the Drought Monitor map.

The U.S. Drought Monitor website is found at droughtmonitor.unl.edu. The site is produced by the National Drought Mitigation Center at the University of Nebraska-Lincoln, the National Oceanic and Atmospheric Administration and the U.S. Department of Agriculture.

According to precipitation gauge reports on Valley Water’s website, areas of southern Santa Clara County have received from 20-40 inches of rain so far this winter. The average annual rainfall for South County is about 24 inches. The rainy season ends in May each year.

Valley Water declared a flooding emergency earlier this month due to heavy rains. The agency’s board of directors voted to extend the emergency Jan. 10.

Valley Water continues to urge residents, businesses and property owners to continue to conserve water. The agency’s website offers tips and programs to help people cut their water use at valleywater.org/watersavingsorg.