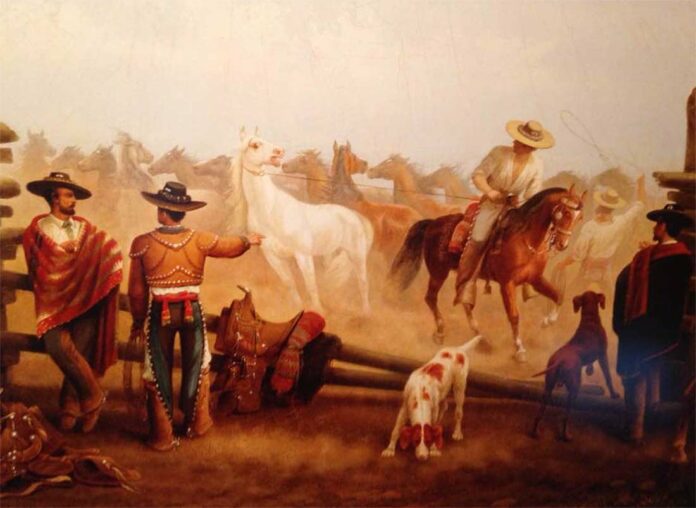 Preserving the Past: The first ranchers of Gilroy and Santa Clara County

Throughout the centuries the horseman’s blood has run through the veins of our ancestors, from the early days of old Spain to Mexico and on into California and present-day Santa Clara County and Gilroy.

Cattle ranching techniques were brought from Espana and improved upon to accommodate the landscape of the Americas. After the conquistadors settled in New Spain many turned to cattle ranching which became an extensive enterprise and soon spread to the Northern Frontiers, now called the United States. In order to control their herds, these men turned to their faithful friend and lived in the saddle herding their livestock.

In the land of the Californios these colonists started out as cavalrymen and ended up becoming ranchers. Like their conquistador ancestors, they possessed the skills to tame and handle their horses. Among these early ranchers of the Gilroy area were the colonists brought by Portola and the De Anza party of 1775. These first Latino settlers and ranchers included the families of the Ortega, Bernal, Alviso/Albizu/Arvizu, Castro, Pacheco, Moraga and Berryessa families.

The Anza expedition, with 235 colonists and soldiers, established the longest international trail in the world, extending from Culiacan, Mexico to San Francisco, California. Along the way, his party founded the Presidio de San Francisco and the Pueblo de San Jose. The families of the surviving soldiers were rewarded with land grant ranchos. Captain Juan Bautista de Anza was made the Governor of New Mexico as his reward. The legacy of this achievement lives with us today in the names of the soldiers and their ranchos.

Corporal Domingo Alviso, as he is known in most American texts and literature, was a soldier in the King’s Army and listed in the roster of the Tubac Presidio, in what is now Southern Arizona, when he was attached to the de Anza expedition. He, along with his wife, Maria Angela Trejo and four children, left Tubac on Oct. 13, 1775 and arrived in Monterey, Alta California on March 10, 1776. Later they helped found what is now the city of San Francisco and San Jose, California.

The spelling of his surname, as well as that of his wife’s, has variations. The variations of Corporal Domingo’s last name are easily explained when one realizes that in the translation from the original Basque to Spanish and then later into English, the name has been through at least three corruptions and possibly more as different transcribers over the years have changed the name from Arvizu to Albizu and finally Alviso. As an example, Domingo and his wife, Maria Angela, can be found in the colonial mission records of the 1700s, in Arizona as well as in Mexico. They are listed as Albizu the descendant of an Arvizu with his wife’s Trejo maiden name written as Maria Angela Trexo.

These men, their families and their descendants became the settlers and the builders of the California which we know today.

Questions, comments and other information can be sent to [email protected].