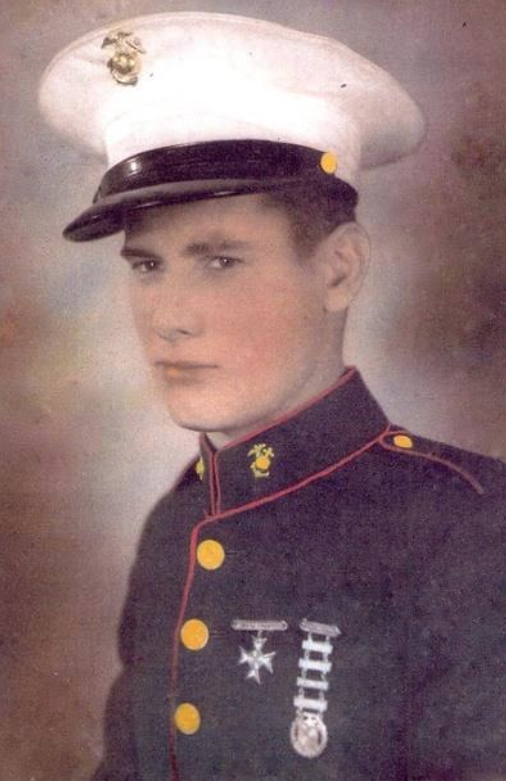 A Salute for Frank Masoni

By: submitted
December 4, 2017
488
0
An American hero came home Friday, Nov. 17, 2017. Frank Louis Masoni returned home from the war. Not the Middle East, not the Vietnam War, but World War II.
Frank was 20 years old when he volunteered for the Marine Corps. He had been a farm boy. He worked in the fields with his father and younger brothers. He had had been trained to use different tools–guns, rifles, grandees, and even pots and pans, so he was made an assistant cook.
Frank was mortally wounded on Nov. 21, 1943 as American troops, for the second day, attempted to storm the island of Betio in the Tarawa Atoll located in the South Pacific. His remains were eventually interred in an unknown soldier grave in Hawaii
Five years ago, Frank’s family in Gilroy was notified of an attempt to return fallen service men to their families. DNA samples were requested. This past August, the family was informed that Frank had been identified. Frank was coming home.
His plane landed at the San Jose Airport and was greeted by family and a military Honor Guard.
The passengers remained seated on the plane as Frank’s coffin was slowly removed. His American flag draped coffin was placed in a hearse for the last leg of long overdue journey.
Frank’s motorcade processed down Highway 101 with motorcycles and police vehicles flashing their blue lights. Family followed as did a military Honor Guard and a civilian group of Veterans Motorcycle Association. On every highway overpass were police and fire vehicles. Standing atop a fire truck were firefighters standing at attention and saluting. This continued at every overpass all the way to Gilroy.
On Saturday, he was buried in the hometown of his birth, Gilroy. Frank came home 74 years after his death on that South Pacific island.
Family, friends of the family and even strangers gathered to see that Frank received the hero’s burial he so deserved after all this time away from home. They gathered at Habing Family Funeral home hear how the Masoni family waited all these years, for Frank to come home. Frank’s mother, Clorinda, wrote many letters to the War Department in Washington asking for her son’s remains.
Her letters and prayers have finally been answered, but she is no longer here to welcome her son home. In her stead were many wonderful people of Gilroy. They came out of their homes to stand at the curbs as Frank passed. They lined First Street. The veterans saluted, the women and children held flags over their hearts. There were “Welcome Home” signs. At the intersection of Wren Avenue, the procession was met by two Gilroy Police Department horses and riders. They escorted Frank down the street to his final resting place. No traffic moved. It was eerily silent. All you could hear were the horses hooves on the pavement, in step and so solemn. They knew what all of Gilroy knew, an American hero came home on Friday.
Karen Pedigo, Gilroy
Share
Facebook
Twitter
Linkedin
WhatsApp
Email
Print