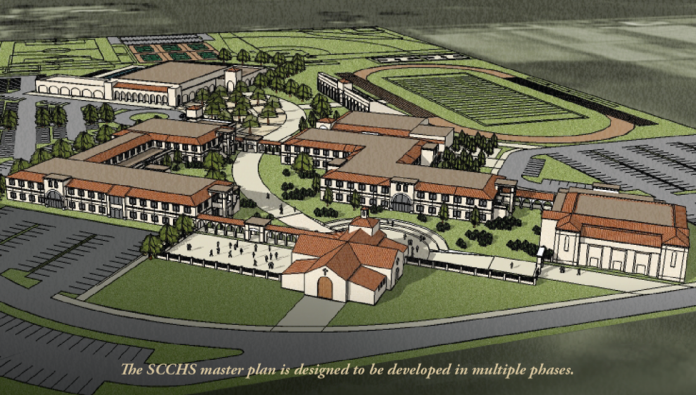 The Diocese of San Jose said  fundraising, a construction timetable and overall project costs have been put on hold until the Local Agency Formation Commission rules on the City of Morgan Hill’s annexation request, by mid-December at the earliest.

Proponents of a new Catholic high school southeast of Morgan Hill are keeping their fingers crossed that the county body will change course from previous denials and allow them to build the private school.

“We did some preliminary fundraising before 2016 but decided to postpone our campaign until it is passed through LAFCO,” said Rev. Steve Kim of St. Lucy Parish in Campbell. Kim has been designated as the spokesperson for the Catholic Diocese of San Jose and those trying to turn a concept into a reality for South County families.

“Once it is approved through LAFCO, we will immediately set a timeline and move forward with the campaign,” Kim added.

Earlier cost estimates, now more than two years old, were around $30 million to build the high school. However, with rising construction costs in a competitive market due to several variables, such as the availability of matching state funds for public and charter schools, that figure could increase greatly by the time ground is broken.

The proposed school site, more than 65 acres of land in the southeast quadrant of Morgan Hill, is bound by Tennant Avenue to the south, Murphy Avenue to the west, Barrett Avenue to the north and abuts an agricultural field to the east. The Morgan Hill City Council voted 3-2 on Sept. 5 to submit an application to annex the land to LAFCO.

Although unable to provide specific figures on costs, Kim did detail preliminary school plans and ideologies gathered through feedback from stakeholders within South County. The school would start out with a freshman class and grow each year until reaching a full high school enrollment of up to 1,600 students in grades 9-12 with about 100 faculty members, according to Kim.

The school, which if approved, will be called St. John XXIII College Preparatory, has a mission statement “to educate and cultivate ambassadors of faith, ethics and knowledge in service to humanity,” according to a proposed school profile being developed by the Diocese.

Kim shared that organizers have surveyed and interviewed parents, students and stakeholders in Morgan HIll to see what they are looking for in a Catholic high school and will continue to do so as they finalize their plans. However, nothing is set is stone, Kim added.

“With our core values of design thinking, learn by doing and strong values, we look forward to many projects that deal with partnering with local farmers and environmentalists to work on sustainability,” said Kim of a curriculum focus at the school.

“St. John XXIII College Preparatory will be established for the purpose of developing and creating students who are collaborative, resilient and creative problem solvers through the concept of design thinking,” as described by organizers. “The students can and will be shapers of knowledge through this teaching and learning curriculum.”

The Diocese still has a long road ahead with the key hurdle being LAFCO approval to annex the land into city limits.

In October 2015, the City Council submitted to LAFCO a series of land-use plans called the Southeast Quadrant for annexation into the city. The land for the proposed high school was included in these plans.

In March 2016 the committee denied the annexation request. A city is only allowed to submit plans to the committee once a year. With the decision coming a year later, the city submitted a request to annex only the land for the South County Catholic High School. The request was denied in June 2016.

The 2018 annexation amendment would include nearly 65 acres of land on Murphy Avenue, between Barrett and Tennant avenues. The land is within the city’s urban growth boundary, but not within city limits. In order to receive city services such as fire, water and power, the land would need to be annexed.

In Santa Clara County, there are 241 private schools, serving 50,695 students, according to privateschoolreview.com. About 40 percent of those schools are religiously affiliated, most commonly Roman Catholic and Christian. Bellarmine Prep, Archbishop Mitty, Valley Christian and St. Francis are among the most popular private high schools in the county.