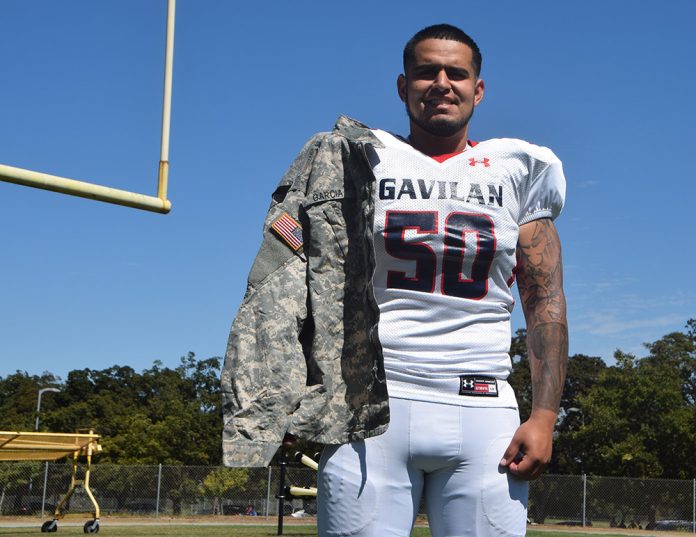 Gavilan College two-way starter Branden Garcia is a seven-year Army veteran, and now that he’s out of the service, he’s working on his post-military dreams: an education and a shot at playing for a four-year football team.

Garcia, 25 ended his stint in the US Army in August. Out of North Monterey High School, he had turned down offers to play college football to instead follow in the footsteps of his older brother, Rey Garcia, who was a Marine. Branden Garcia went from the California National Guard to sign up with the Army, where he served as a military policeman with deployments from California to South Korea near the DMZ.

“I always had a passion for sports,” Garcia said. “I had offers from the University of Laverne, and Menlo offered me. But I wanted to follow in the footsteps of my brother. I was young.”

On Aug. 6, two days after he arrived back in California, he was back on the field. Garcia was released from his current duties on Aug. 3 but he was still technically a soldier since his DD214 discharge papers passed on Aug. 15. The second he hit the field, Garcia became the oldest player on the Gavilan roster, having two years on the next-oldest player.

Garcia has gone from protecting four-star generals to protecting Gavilan quarterback John Bell. Garcia starts on the offensive line and defensive line. He’s the only player on the team who does double duty. His natural position is at linebacker, but necessity forced Gavilan head coach John Lango to press the vet into service on both sides of the line.

On Saturday, a 29-0 loss to De Anza, Garcia squared off against a 6-foot-8, 310-pound offensive tackle. He finished the game with two solo tackles and one assist. So far this season Garcia has 11 total tackles.

Overall, the game is faster, and the players are bigger since Garcia played at North Monterey. Garcia kept in shape in the military and played inter-battalion flag football games.

“After not playing for seven years, I thought it would be a much faster game,” Garcia said. “I knew these guys would be big, but my body is more mature. I’m a man, and I have the strength that goes with that. We were good at North Monterey County, so it hasn’t been a drastic change.”

Getting Garcia to play at Gavilan has been a slow burn for Lango, who tried to recruit a younger Garcia almost eight years ago during his first stint with the team as head coach. Recruiting never ends in college football, and Lango kept in touch with Garcia while he was in the military.

“I knew the program took a downward spiral, but I wanted to part of something new, a change to get back to good football,” Garcia said.

Rather than being put off by the Rams record the past two season, 4-16, Garcia wanted to be part of a turnaround.

“No matter your age, you can do whatever you want if you’re committed,” Garcia said. “For the first couple of weeks, I was feeling things out. I didn’t want to come right in and be an a-hole to a bunch of kids. At that age, I acted like them. A lot of guys ask me about the Army, and I want to be a positive role model. No matter what, you can achieve your dream. You can do it.”

A big part of Garcia’s dream includes his education. He takes 17 credit hours of courses in addition to football. Gavilan took 53 transfer units from classes Garcia earned while in the service, and he can finish his associate’s degree within a year. After that, his football future must line up with is academic goals since most four-year universities will only accept a limited amount of transfer credits.

Thanks to the GI Bill, Garcia’s classes are paid for, and he gets a stipend of $3,800 every month for 36 months. He keeps costs low by living in a detached room in the backyard of his father Rey Garcia’s house in Castroville. Garcia should exit college with a degree in health science with a concentration on fitness and sports management, with no debt.

While Garcia is a free thinker, the habits of a soldier remain intact. In text messages and conversations his speech is punctuated with “sirs.” When he was asked to switch positions, he agreed without argument. Yet, Garcia can and does think for himself. He follows the news. In particular, he has strong opinions on the anthem controversy and police violence.

“People complain about Nike, and that shows how divided we are as a nation,” Garcia said of the controversy surrounding Nike’s decision to feature Colin Kaepernick in an advertising campaign.  “If we all worked together during a national emergency, how powerful could we be instead of focusing in on the negative? That comes from the top, the President.” I’m not very political, but I want to do what’s right for everyone. It makes us a nation to speak how we feel; we don’t need to agree on everything, but we need to stick to the truth.”

“I wanted to be that good cop,” Garcia said. “You need to police your own, and when a cop doesn’t live up to that oath, they make other cops look bad. If I was a cop, and I saw kids in the park, I’d say hi, and shoot hoops with them. We fear cops too often because they have a badge and a gun.”

As of today, Garcia is 28 credit hours away from transferring out of Gavilan. He has dreams beyond graduation, such opening a community center for at-risk youths in Castroville. Even though he has a life to live after Gavilan, he still has seven more games to go as a Ram. For Garcia, it’s life plus football.

Winning ugly. Over the course of a football season,...