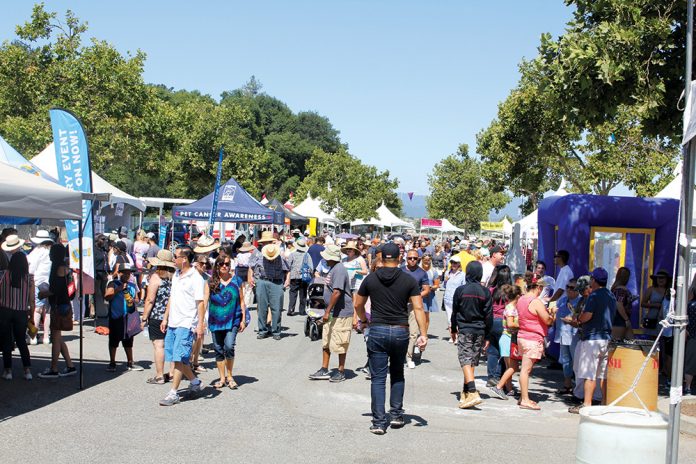 Attendance off 20% at Garlic Festival

Visitors included representatives from Gilroy’s sister city Takko-Machi, Japan, along with several hundred Bay Area residents who rode into town on the weekend on the Caltrain Garlic Train.

Foodies and families from across the globe congregated in Gilroy for the annual celebration of all things garlic. In addition to the traditional favorites on Gourmet Alley, the festival’s first-ever signature cocktail, the Garlic Festival Mule, proved so popular that it sold out over the three-day event, according to the festival.

“I am just incredibly grateful for the dedication of our association and over 4,000 community volunteers who worked so hard to make this event a tremendous success,” he said in a statement.

Despite the size of the crowd, police reported just 15 arrests for minor infractions, at the Christmas Hill Park festival site.

Additionally, police escorted three people out of the festival grounds Sunday for disobeying the event’s rules.

Local authorities praised the overall good behavior of the weekend festival crowd and the work of law enforcement officers from multiple agencies in keeping the peace.

“There were no reported assaults on festival grounds over the weekend,” reads a press release from the Gilroy Police Department. “The law enforcement presence at the festival helped ensure the event was free of violence and safe for everyone to enjoy.”

On Friday, July 27, Gilroy Police arrested two people for public intoxication, the press release says. One of these suspects also had a warrant for his arrest.

On Saturday, July 28, Gilroy Police and agents from California Alcohol Beverage Control made eight arrests: three on suspicion of public intoxication, four for being minors in possession of alcohol and one for furnishing alcohol to a minor, according to police. Two of the detained minors were also in possession of fake identification cards.

On Sunday, July 29, police arrested five people on suspicion of public intoxication, according to the press release. Two of these suspects were repeat offenders from the previous day’s Garlic Festival arrests.

In addition to these arrests, officers also escorted three Garlic Festival patrons out of the park for disorderly conduct and failing to follow the festival’s rules.

Competition on the Garlic Cook-Off Stage kicked off on Friday with the Champions for Charity cooking challenge, emceed by MasterChefSeason 7 Winner Shaun O’Neale. Four teams of local first responders competed in three elimination rounds (appetizer, entrée, and dessert) to win $3,000 for their favorite charity. John Campbell and Morgan Sanders from AMR Santa Clara County won the competition for the second year in a row and will be donating their winnings to the Alzheimer’s Association.

In the brand-new Garlic Chef Jr. competition, hosted by O’Neale on Friday afternoon, eight young chefs faced off for the chance to win a notebook computer valued at $500. The top prize winner was Addyson Dell, age 6, who needed a stool to reach the stove but still wowed the judges with her Garlic Mac N Cheese with Crispy Garlic Chicken Tenders and Roasted Asparagus.

On Saturday, Will Simbol from New York, NY claimed the top prize of $5,000 (and the coveted garlic crown) in the Great Garlic Cook-Off. This contest, one of the nation’s most prestigious amateur cooking contests, was hosted by Olympic Champion and Food Network star Brian Boitano. Simbol’s winning dish was Savory Crunchy Freshy Tangy Shrimpy Herby Garlic Lumpia Wrap. Second place was awarded to Lidia Haddadian (from Pasadena, CA) for Roasted Garlic and Potato Pierogis w/Garlic Shallot Bacon Jam, and third place was awarded to Leah Lyon (from Ada, OK) for her A-MAIZ-in Garlic-Chili Buttered Rose’ Lobster Tails with Flamenco Pesto.

On Sunday, four professional chefs faced off in the Iron Chef-style “Garlic Showdown,” hosted by Iron Chef and co-host of “The Chew” Michael Symon. Contestants had to prepare two dishes using a mystery basket of ingredients that included dried prunes, fresh prunes, and fresh plums – and plenty of garlic, too, of course. For the second year in a row, Chef Carlos Pineda from the Culinary Academy and Kneaded Bakery at Rebekah’s Children’s Services in Gilroy won the $3,000 prize and will be donating his winnings directly to the Rebekah’s Children’s Services Culinary Academy.