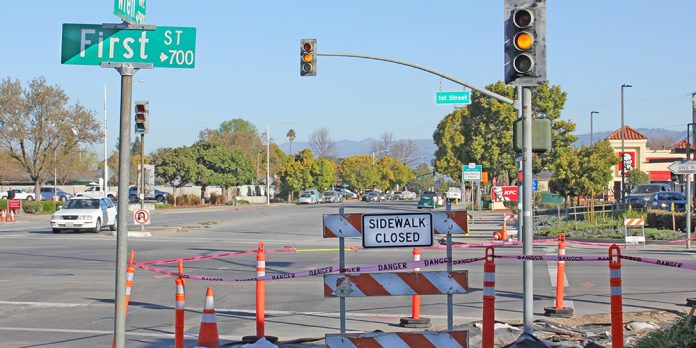 It all began in the summer of 2018: the First Street Project.

The aggravation for businesses, commuters, neighborhoods, pedestrians and bicyclists continues, with no apparent end in sight.

In response to repeated inquiries from the Gilroy Dispatch, Caltrans on Feb. 20 said the paving is now scheduled for the “fall of 2020.”

In a Feb. 20 statement, Caltrans said:

“Rain and lower temperatures impacted the paving operation and the project in general. The City of Gilroy is very much aware of the status of the project and have been attending biweekly meetings. The City of Gilroy has suggested that portions of the project (specifically the grinding and paving), be done during the summer months, while currently electrical work is [on]going. Sidewalks, curbs and ramps work will resume by the end of the month. In the meantime, detour route signs for safe crossing have been installed.”

The statement added: “We encourage pedestrians to follow detour routes while project is in process.  Project is still on schedule for completion Fall of 2020.”

City officials this week said they had no idea when First Street will be repaved by the state, and referred inquiries to Caltrans.

City officials dug up much of First Street in 2018 and 2019—also known as Hecker Pass Highway and Highway 152—west of Monterey Street, so that new water lines, then new sewer lines could be installed before a major repaving project by Caltrans. Nearly 8,000 linear feet of a 100-year-old 16-inch water lines were replaced.

That meant periodic water and sewer interruptions for the residents and businesses. For months, traffic was often limited to a single lane in one direction or another. Then various sidewalks were torn up, awaiting replacement as part of the repaving.

The city council voted last spring to end parking on First Street in preparation for the Caltrans portion of the project.  The city even created a webpage where residents could get regular progress reports on the project. At first, Caltrans said the repaving would begin in the summer, then late summer. Then it was postponed until the fall. Then some rain in December caused more delays. The weather improved in January and February, but no repaving occurred.