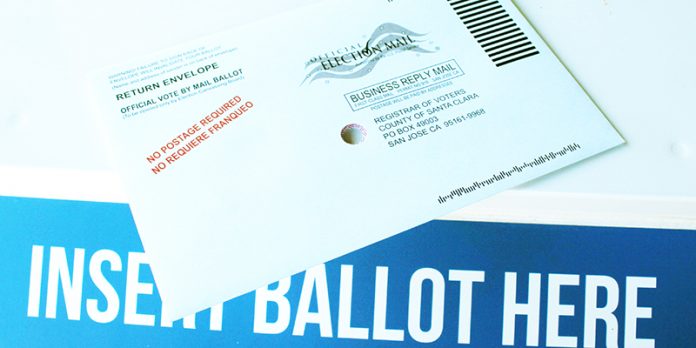 The official March 3 Primary Election Day is more than a week away, but vote-by-mail ballots are already piling up at the Santa Clara County board of elections. Some voting centers will be open for business on Saturday, Feb. 22.

In Morgan Hill, the vote center that opens Feb. 22 is in the Fellowship Hall of the Morgan Hill Presbyerian Church, 16970 DeWitt Ave.

In Gilroy, the vote center that opens Feb. 22 is at Grass Farm Garden Accents, 11155 Lena Ave.

Lists of all vote center and ballot drop box locations, including dates and hours of operation, are available online at www.sccvote.org under the Vote in Person, Vote Center and Official Ballot Drop Box Sites Information tab. For a searchable database of Vote Centers, Ballot Drop off locations, to track your ballot and more information go to our e-services site.

To locate the ballot drop box nearest you, or to check and see if you are registered to vote, visit tinyurl.com/vj2qj3a.

The presidential primary, combined with hotly contested ballot measures like the two in Morgan Hill, and a slate of Senate and Assembly candidates have elections officials expecting a large turnout.

Another change this year is the new marking method on ballots: they are “fill-in-the-bubble” selections, replacing the previous “connect-the-arrow” selections.

At the county’s 110 vote centers, the county has all new voting equipment—the first complete system upgrade since 2003.

At the centers, voters will check in with the new E-Pollbooks—no more signing in on the paper rosters. Also, ballots will be submitted through machines that instantly identify if there’s an error that needs correction: for example, someone overvotes for three candidates in a two-candidate contest.

The county also has new high-speed ballot counting machines. Vote-by-mail ballots are arriving every day, and warehouse operations are getting ready for the opening of vote centers this weekend.

One of the biggest changes of the Voter’s Choice Act is that there are no longer assigned polling places. Instead, you can vote in person at any vote center.

The county promises that each vote center will be supported by more staff members than a traditional polling place, offering better voting assistance and language assistance to ensure everyone has a chance to make their vote count.

Conditional voter registration allows individuals to register to vote and cast a ballot at the same time.

Even though the Christopher High football team finished 7-6...
Business

Small businesses in Santa Clara County can apply for...