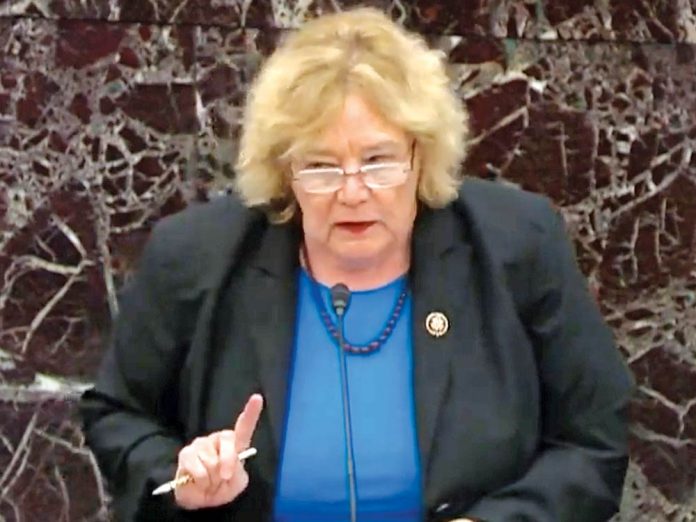 Local congress member acts as one of seven impeachment managers

Rep. Zoe Lofgren was front and center at the opening session of the impeachment trial of President Donald Trump, arguing for a motion for the Senate to subpoena new evidence in the case against the President.

In a rearranged Senate chamber, standing in front of Chief Justice John Roberts on Jan. 21, Lofgren told the Senate, “Congress and the American people deserve the full truth.”

“Don’t surrender to the President’s stonewalling,” she said, wagging her finger at the senators. “It will allow the President to be above the law.”

She said the Senate needs to be committed to “truth, fairness and justice.”

“History is watching,” she said.

The House prosecutors’ proposal for new evidence was later tabled by the Senate on a roll-call 53-47 party-line vote.

On her appointment Jan. 15, Lofgren had said that “as the only member of Congress who has participated as part of the Judiciary Committees for all three modern impeachment proceedings, I must be clear that this is not something I sought or relish. Impeachment is a grave and solemn matter.”

“It’s a stress test for our democracy,” she said of the impeachment trial. “I hope every senator is prepared to seriously consider and vote honestly with an open mind for the future of our democracy.”

In an op-ed in Newsweek this week, Lofgren wrote, “Sadly, President Donald Trump’s actions have damaged our national security, undermined the integrity of the next election and violated his oath of office. His actions have brought impeachment back to the forefront of the national conversation and have made me think long and hard about the other two presidential cases that I worked on.”

“The facts in front of us now are clear,” Lofgren wrote. “They show Trump made official acts—millions in life-saving military aid for an active war zone and a coveted White House meeting showing support against Russia—conditional on political favors for himself in the 2020 election.”

“Never before in our country’s history has a president simply refused to provide all documents to Congress or to order that no one in the executive branch testify,” she wrote. “His obstruction of Congress is unprecedented—and claims of absolute immunity or the assertion of complete privilege go against our Constitution. If allowed to stand, it would fundamentally change the balance of power between our three branches of government. It would prevent Congress from conducting needed oversight of this president or any other in the future.”

“The House has demonstrated its courage and patriotism,” Pelosi said when she named the manager for the case. “Our managers reflect those values, and will now honor their responsibility to defend democracy for the people with great seriousness, solemnity and moral strength.”

The other impeachment managers are Adam Schiff of California, Jerry Nadler of New York, Hakeem Jeffries of New York, Val Demings of Florida, Jason Crow of Colorado and Sylvia Garcia of Texas.