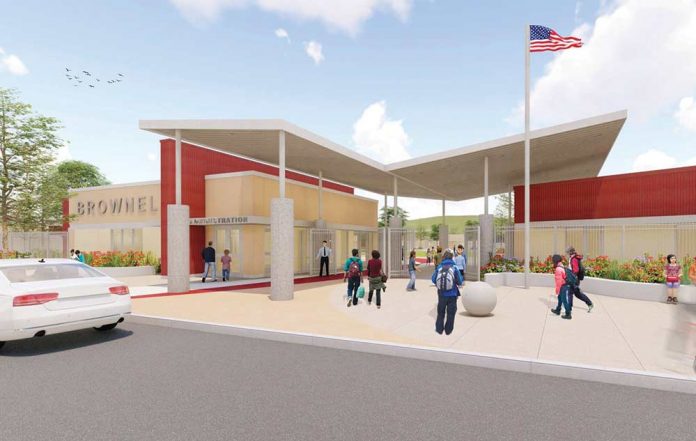 As voters in neighboring school districts are deciding the fate of bonds to finance major renovations, the families and staff of Brownell Middle School in Gilroy have embarked on a $71 million “modernization” project funded by voter approval of two prior bond measures.

Gilroy voters’ support of the $170 million Measure E in 2016 and the $150 million Measure P in 2008 made it possible for the Gilroy Unified School District to demolish and replace 37 classrooms at the campus at Carmel and First Streets.

“This project will transform the campus and enhance the surrounding Carmel and Hanna Streets neighborhood and the Gilroy community,” according to the district. “Once complete, the new middle school campus will be another state-of-the-art facility in the Gilroy Unified School District and will be highly visible to community members who travel on First Street.”

The combination renovation and replacement project began last summer, and this year’s sixth graders face two years of construction chaos before the new campus—most of it next to the current structures—is fully utilized in the 2021-22 school year, according to the district’s timeline. Many students will be moving into new classrooms one year earlier, at the beginning of the 2020-21 school year.

At Brownell, the district is using a newly popular method of school construction in California that is faster and virtually eliminates cost overruns, where the general contractor actually owns the new construction during the buildout phase, and where most of the buildings are prefabricated “pods” that are installed on the site, rather than built from the ground up.

The voices of multiple generations have echoed in the hallways of the Brownell Middle School since seventh and eighth graders moved into new buildings in 1949. Additional buildings were added two years later.

No significant changes were made until the last few years when a sixth-grade wing was added. Originally, the school served seventh and eighth grades only. Enrollment last year was 845 students, about the same as at the district’s other two middle schools— South Valley and Ascencion Solorsano middle schools.

Flint Builders of Roseville is the general contractor for the project, which will erect 760,000 square feet of educational structures on Brownell’s 17.5 acres. New single-story buildings will be reconfigured into a nearly all-new middle school.

New facilities will include six classroom buildings, an administration building, library/media center and a kitchen addition to the existing multi-purpose building.

New construction will also include the addition of a new staff parking lot and a staff and visitor parking lot, new school signage, a new marquee sign and multiple independent custom shade structures.

Modernization and site improvements will include the existing multi-purpose, gym, PE and athletic facilities, pedestrian hardscape, landscaping, new dropoff facilities along the west and east side of the school, and new on-site utilities.

The Brownell Middle School Modernization Project began in the summer of 2019.

Conceptualizing for the project began in early 2018 with a design team that consisted of staff members and administrators from the district and Brownell. The school design has new classroom “pods” for each grade level, featuring collaborative classrooms and an integrated outdoor learning environment.  Students will have the opportunity to learn using new technology infrastructure, “maker spaces” and science labs.

The north field at Brownell has since last May been the construction zone for Flint Builders, and it is to remain closed as the project progresses. Before construction could begin, the district had to remove more than 700 tons of contaminated soil from the north field because of trace levels of arsenic, PCBs and pesticides. Many of these traces were leftover from when the property was used as an orchard.

The four new classroom pods (28 classrooms) are being brought in and will be in place by July.

The district is to officially take occupancy in the summer of 2020.

Existing school structures (except current kitchen) will be demolished and foundations will be poured for the new buildings.

Two sixth grade pods, a new media library and new kitchen are to take shape in the next school year. All final work, including new outdoor athletics fields—track and basketball courts—is to be completed by the end of next school year, according to the district timeline.

Voters this month are being asked to approve a $900 million school bond measure in Morgan HIll, and a $30 million measure for San Benito High School.